Today we were in our favorite Kokořín region and we visited Houska Castle. This castle is very special – it is said that mysterious forces are raging here and there is a gate that leads to another dimension. Mysterious, magical, cursed or infernal. Houska castle has all these attributes.

So now for some solid evidence. The first question that arises is why was Houska Castle built at all. The castle stands in a place that has no strategic significance. It is not close to any main path, it was not a royal castle, it didn’t even have function as a border castle, it was built in a completely desolate landscape without an available source of water. There is no reason why this castle should be built in a first place.

It is also very interesting from an architectural point of view. The whole defense system is directed against the “inner enemy”. Perhaps “something” was guarded here which was not allowed to get out. 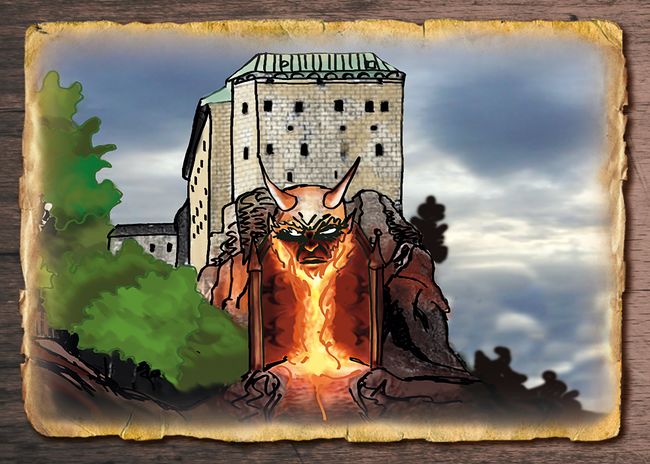 According to the legend the castle was built on a rock in which was a gorge leading to hell. By hell we can understand basically anything. It is above this gap where the castle chapel is located. It is also said that in the basement of the castle there are a number of underground corridors and spaces in which “certain things” and skeletons of inhuman beings are buried.

So the question is, “What was the danger that probably threatened the whole country, if such a castle complex was built against this danger?”

Houska Castle had several owners – mostly aristocratic families who used this castle as one of their residences. The last owner was Senator Josef Simonek who bought the castle in 1924 and lived here with his family until 1939. After that, the castle, thanks to its location in the Sudetenland, was used by the German army until 1945. After the liberation the communists came to power and the castle was confiscated and passed to the state like all other private properties.
In the early 1990s after the Velvet Revolution the castle was handed over in restitution to the last owners – Simunek family who are still trying to repair the damage done by the Communists.

Finally I would like to explain the name of Houska Castle. Houska means bun, roll or bread roll in English,. But in this case it has nothing to do with food. The castle was built in the area of an originally wooden, later stone fortified settlement (end of the 9th century) which the Duke of Pšovany, Slavibor, founded for his son Housek. So the castle was named after him – Houska Castle.

This is not the only castle in our country that has a special or even bizarre name – but this will be my topic for the next post. Stay with us!

This part will be about how Easter is celebrated in our country. I'm not going…

Do you want to refresh your stay with a trip on the boat along the river flowing through the heart of Prague?

Educational Tours for groups of students.
Ask for a special price!

Copyright Praguexplorer 2022
Back To Top
×